Assassin’s Creed Syndicate is an upcoming historical action-adventure open world stealth video game being developed by Ubisoft Quebec and to be published by Ubisoft. It is set to be released on October 23, 2015 for the PlayStation 4 andXbox One and Q4 2015 for Microsoft Windows. It is the ninth major installment in the Assassin’s Creed series, and the successor to 2014’s Assassin’s Creed Unity.

AC Syndicate is allowing you to play with different characters.Switching between two protagonists will be possible and one of them is female.Male lead Jacob Frye is meant to be more of a hot-headed brawler, specialized in close combat.The second character is his twin sister Evie and she is strong in stealth and relies on her intelligence and wit.The Assassins’ main weapons this time around include brass knuckles, a compact revolver, a cane sword and the traditional Nepalese curvedkukri knife and combat is faster-paced than before with latency having been cut in half and multiple enemies attacking the player at once.Additionally new travelling systems make their debut in the game, such as a rope launcher which allows the player to rappel up structures as well as create a zip-line between buildings, and carriages, which can all be piloted or simply occupied by the player and trains.

In 1868, at the tail end of the Industrial Revolution, with the Assassin Brotherhood all but eradicated, twins Jacob (Paul Amos) and Evie Frye (Victoria Atkin) leave Crawley for London and arrive to find a city controlled by the Templars, with both the Church and the Monarchy losing their power. Raised as Assassins to follow the Creed, Jacob and Evie aim to take back the city from Templar control by infiltrating and uniting London’s criminal underworld, aided by notable figures of the era such as novelist Charles Dickens and biologist Charles Darwin.

As in previous AC games,you will have more than one suitable option to move through the missions.For example,one of two main characters  crouches down, lifts their iconic hood, and as long as she remains stationary, no guards will see them.By timing your movements well, and avoiding any alerts along the way, you can end up on a balcony overlooking the target.

“Giving access to two protagonists is a way we’re giving players a choice,” producer André-Anne Boisvert says. “But with these sandboxes, we want to give another layer of choice, and let you choose where to go, how to get there, and finally, how to kill the target.”

Next approach is a little more creative, and it’s something completely new to the Assassin’s Creed franchise.One of Evie’s other contacts in the area has access to a police officer’s uniform. After a conversation with him, he agrees to stage a mock hostage delivery.He leads her into the fortress–right through the front door, no less–holding her arm behind her back. If you move slowly enough, and avoid any close contact with the guards, it appears as if you’re held captive. This option leads us right to Thorne, who insults her “assassin abilities,” shortly before she leap toward her, ending the mission once again.

“We really want you to feel creative again,” Boisvert says after the demo ends. “Taking the hostage approach is an example of this. It’s something that fits in the world we’re building, and it fits Evie’s character. She’s clever, and creative, and we want her play style to reflect that.”

Playing the game will bring back a sense of familiarity and excitement. Ubisoft states that there will be new tools and weapons that come in handy, like the hallucinogenic darts that can cause an explosion of hallucinogenic gas when used creatively. Carriages on the streets can be used, whether they’re occupied or not. So expect a Victorian-style street chase, as the enemies can also do the same stunts.

With eyes now on Ubisoft’s next “Assassin’s Creed” installment, hints of a release date has also been sighted. According to Polygon, “Assassin’s Creed Syndicate” will arrive during the holidays, as stated in a marketing promotional material. However, no other specifics were given by the publisher. 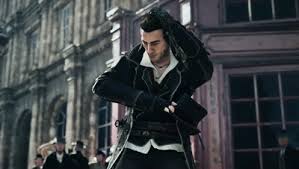 In addition to the release date, the obtained marketing promotional material also revealed the setting of the game, which is in London. Specifically, it will be set during the Industrial Revolution, which will be recreated in a very immersive world. Other previously leaked details in the material include the preorder bonus at GameStop, which involves a replica of the necklace worn by the protagonist in “Assassin’s Creed Syndicate.”