It’s 1946 and the Nazis are on the verge of winning WWII. In attmepting to turn the tide in the allies’ favor, B.J. Blazkowicz has to embark on an epic two or three part missions deep within Bavaria… Part one of Wolfenstein: The Old Blood – Rudi Jäger and the Den of Wolves – pits BJ Blazkowicz against a notorious prison warden as he breaks into Castle Wolfenstein in an attempt to steal the coordinates to General Deathshead’s compound. In the second part – The Dark Secrets of Helga Von Schabbs – search for the coordinates leads him to the city of Wulfburg where an obsessed Nazi archaeologist is exhuming enigmatic artifacts that threaten to unleash a dark and ancient power.

A standalone prequel to last year’s excellent Wolfenstein: The New Order, The Old Blood marks a return to the classic shooter’s traditional ideas, environments and plot beats. It’s a strange creative shift. The New Order proved that it was possible to separate B.J. Blazkowicz from Castle Wolfenstein and still create something that felt like a Wolfenstein game. I admired it as much for its idiosyncrasy as its gunplay: it’s a game of surprising heart, staggering violence and stylistic originality. It traded techno-gothic Nazi fortresses for retro-futuristic Nazi moonbases and was better off for it. 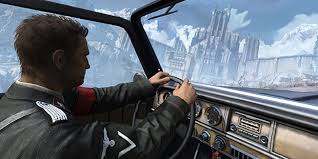 The Old Blood shares The New Order’s impactful gunplay but lacks its predecessor’s pace and variety. A forced stealth section near the beginning lasts long enough to become irritating; what follows alternates between running gunfights, open-ended arena encounters and defense sequences with little escalation. Its high points are, as before, the moments when it lets you take on a room full of Nazis as loudly or quietly as you please. The way Wolfenstein seamlessly transitions between stealth and deafening violence is still its best trick. For every arena that makes the most of that freedom, however, there’s another that is too small, too linear or too prescriptive to really deliver. 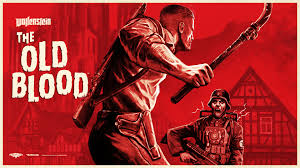 Then there the low points: on-rails turret bits, bullet-sponge enemies, a fiddly vehicle section. The introduction of the supernatural doesn’t add anything that you haven’t encountered in a hundred other shooters, including more than one prior Wolfenstein game. The final boss marks The Old Blood’s lowest ebb, a healthbar-whittling chore that lacks the visual ingenuity and environmental puzzle-solving of its counterparts in The New Order. 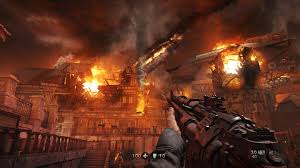 There are new weapons, but the majority of these are reverse-engineered versions of guns from the previous game, downgraded to match the ’40s setting. The sawn-off shotgun is gratifying to use, however, and a new grenade-launching pistol provides you with a room-clearing panic button mitigated by limited ammunition.

The campaign took me around four and a half hours to complete on the second-hardest setting, with about 50% of the game’s hidden collectibles picked up along the way—completionists are likely to get a few more hours out of it. There’s also a score attack mode that allows you to replay certain arena combat encounters from the campaign in order to compete on global leaderboards. This is a welcome addition, one that I’d like to see fleshed out in future Wolfenstein games: it makes the most of the game’s excellent-feeling guns, and offers a way back into raw combat for those unwilling to sit through the cutscenes and stealth sections again.

MachineGames are still masters of first-person violence, but this return to Castle Wolfenstein doesn’t give them anything new to work with.