SOMA is something maybe expected but in avery unusual way.Paradox as it may sound but it is hit the spot.Very scary game and altough it is a survival game offers something more than the other games.

We were always suspicious of last year’s supposed survival horror renaissance. As fans of the genre we were pleased to see big budget games such as The Evil Within, Alien Isolation, and Silent Hills, but we were wary that they all seemed to be jumping on a bandwagon that hadn’t yet been proven to exist. And one by one they disappointed, in terms of quality, sales success, and, well… being published by Konami. But true horror never dies, as we’re sure some tagline or other has claimed, and SOMA is an impressive next step in the evolution of the genre.

Much as in cinema, it’s always seemed as if indie creators are the most reliable custodians of true horror and the pedigree of SOMA developer Frictional Games couldn’t be better. They’re responsible for 2010’s Amnesia: The Dark Descent.

But unlike Alien:Isolation or Amnesia The Dark Descent,SOMA shows to be even more clever than those games.Relying more on the fear of what might be and what you may or may not have glimpsed around the corner.

Just like Amnesia we often found ourselves cowering in the corner afraid to even look at what was pursuing us, let alone figure out a way to combat it. A feeling of total dread that is magnified by the superbly horrible sound design and hellish noises made by your pursuers.Without revealing too much it is difficult to describe real story and what this game is about.So it would be best experience to try the game for yourself and let the game amazes you.

SOMA is more ambitious than that, and you can sense a new hybrid genre struggling to be born from the seeds of its disparate ideas and influences. The end result is not wholly satisfying, but despite all the frustrations and the clichés this is one the most intelligent horror game ever made.

In gameplay terms SOMA is more walking simulator than true survival horror, but the interface works well and opening and closing doors using the right analogue stick adds an effective sense of immersion. There are a few puzzles that revolve around more complicated interactions but they’re there for atmosphere more than they are a genuine obstacle. Although the game does fall into the trap of seemingly all sci-fi horror, including Alien Isolation and Dead Space, in that you’re constantly moving from place to place fixing things and turning the power on – as if playing the role of some tormented repairman.In most other games, this tendency to run into walls might be frustrating. In Soma, however, it more often serves to heighten the tension.

SOMA puts you in a “under the sea” playground.It is a horror game that should try to act less like a horror game. Taking place in a remote underwater research facility, it plays on fears of the deep sea, of drowning and darkness and the disturbing alien lifeforms that dwell down there – all a welcome change from the mansions and asylums that tend to haunt horror titles. But the sea is rarely a threat – the ocean floor is often just a beautiful corridor between the underwater bases in which you experience more traditional horror gaming fare: ie running away from monsters. The thing is, this game is horrifying enough without them.

Soma is essentially an existential nightmare about personal identity. “Soma” is Greek for “body”, as in “psychosomatic”, but the question Soma asks is whether identity can continue through psychology alone.

Early in the game, the player character comes across a robot that’s convinced it’s human, specifically that it’s the person whose memories occupy its robotic brain. Whether or not you believe that psychological continuity ensures personal identity, to progress you have to disable the robot, potentially killing a person who’s aware of your actions. As in The Swapper, in which you solve puzzles by creating clones of your character that you then kill, the interactivity makes this philosophical exploration far more impactful than the same topic considered in a book or a film. 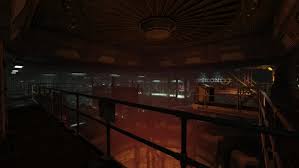 One of the genre cliches’ is written logs.They are all over the place.This has been a part of video game horror for too long and we always assumed it would be done away with as soon as the graphics were good enough for another character to impart the same information face-to-face.

SOMA is a not entirely successful mix of horror and philosophy, but that’s an unusual enough combination that getting anywhere close still makes it a hugely engrossing experience. Since Frictional have already perfected survival horror we’re tempted to suggest they should have focused on the other aspects of the game, and yet that probably would’ve ended up with just another walking simulator.

Main character deals with all his regular concerns over consciousness, identity, and human empathy. Clearly nothing is quite as it seems in SOMA, and as the machinery of the base seems to come alive you’re forced to question both reality itself and your perception of it.

The game is even able to focus on Dick’s preoccupation with artificial intelligence, with much of the game revolving around dilapidated robots that believe themselves to be real human beings. These pathetic creatures are frequent obstacles to your progress, and how to deal with them becomes one of the key moral quandaries.

And now -monsters. You certainly can’t shoot or fight them and too often you end up just clumsily running away, relying on triggering a new checkpoint and returning to it when dead. Although the creatures all react to different stimuli, including some that are blind, their actions still come across as frustratingly random. And while they’re certainly scary they don’t quite make the jump to engaging video game enemies.

Game follows the stylistic horror of H.P.Lovecraft.Frictional’s existential horror will have players explore the eerie, serpentine corridors of Pathos-2 as they try to piece together what exactly went wrong within this most mysterious experimental site.

Soma tells an affective tale and carries the horror genre a few steps forward. Had Frictional shown the courage to shake off tradition entirely, it could have carried it further still.