Do you remember MMO Age of Conan released 5 years ago?!It went to be free-to-play game in order to keep the lights on and players focused. A successful bid, as it turns out, and not only are lights still on, but more fantasy barbarism is on the way: Not more Age of Conan necessarily, but more Conan videogames.

Funcom, the studio behind Age of Conan, has signed a deal with pleasingly-named Conan Properties to be the “preferred partner” for all videogames based on the Conan the Barbarian brand. The blend of business-speak and Conan the Barbarian—who knew he was still a brand?—is amusing, but it’s also interesting because Age of Conan was neither an out-of-the-gate hit nor a slowly-building sleeper: The average US player count for Age of Conan: Unchained on Steam hasn’t been over 100 for almost two years, and is currently languishing in the mid-30s. That’s even worse than Evolve. (It’s doing slightly better in the EU.)

By all appearances, the Conan universe is an ideal setting for a dark, gritty fantasy videogame—not too far from a less-refined Witcher, really. And despite the failure of AoC to set the MMO world on fire, Conan Properties CEO Fredrik Malmberg expressed confidence in the studio, saying it “has shown they are more than capable of managing the rich heritage of Conan and to breathe new life into the world of Hyboria.” It strikes me as kind of a strange sentiment, given that it’s been so long since since Funcom has done anything noteworthy (or anything at all, really) with the property, but who knows? Maybe they’ll surprise us.

On the other end of the Conan spectrum, Conan Properties and video game developer Funcom have certain plans in the works that could offer fans of the original fantasy character even more immediate Cimmerian adventures on the small screen.

According to an official Funcom press release, the developer has entered into a recent agreement with Conan Properties to become the preferred partner for all PC and console video game titles featuring the original fantasy character. Having already enjoyed a lucrative relationship with the gaming studio subsequent to the development and release of the 2008 MMO, Age of Conan: Hyborian Adventures, the two conglomerates are excited to announce that a total of three titles are in the works to be announced in 2016, with the first production to be unveiled in January of next year. 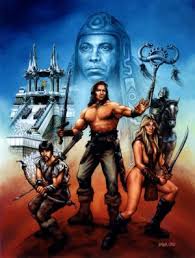 “We are tremendously excited to be strengthening our relationship with Conan Properties.And as game developers, working with such a character and being able to draw from the fantastically detailed world of Hyboria is nothing short of a dream come true.”

It will certainly be an exciting time for fans of the original Robert E. Howard property to enjoy, as theConan the Barbarian property has laid relatively dormant for the twenty plus years since the last feature film starring Schwarzenegger in the title role. In further eager approval of the creative partnership going forward, Conan Properties CEO, Fredrik Malmberg, added:

“Funcom has shown they are more than capable of managing the rich heritage of Conan the Barbarian, and to breathe new life into the world of Hyboria, and we are thrilled to be working together on new, exciting projects.”

As plans continue to unfold within the cinematic and video game worlds collectively belonging to the original Robert E. Howard fantasy universe, fans of the titular hero can expect to see more of their favorite barbarian very soon. With Schwarzenegger possibly returning to the role on the big screen, and with several subsequent interactive titles set in the world of Hyboria yet to come, the Cimmerian warrior appears to still have plenty of fight left within him.