Every year Assassin’s Creed series struggles th show the audience that every new game is truly a fresh experience.But is it so?Syndicate had to choose between ancient lore and underdeveloped modern-day elements and it chooses wisely leaves out multiplayer entirely, and pushes a lot of that baggage into the background, largely freeing itself up to make the most of Victorian London and have fun with sneaking, climbing, and stabbing.

Syndicate smartly negotiates this internal conflict by dramatising it in the form of its twin playable characters, Evie and Jacob Frye. The former is a devout Assassin, intent on stopping the Templars by tracking down the remaining pieces of Eden. Her brother Jacob, however, is a pragmatist – a social reformer who rails against the Assassin’s burdensome legacy and wishes to help his city in more immediate ways, seemingly embodying my desire to move on from the tangled mysticism. They’re both extremely likeable, well-drawn protagonists, and the interaction between the two is laced with a lively sibling rivalry that brings levity to otherwise-earnest cutscenes. But their contrasting worldviews have the greatest positive impact on Syndicate’s structure, which is both engaging and meaningful.

You can freely switch between Jacob and Evie at most points, with side missions and open-world activities open equally to both. Campaign missions, however, are different, with Jacob taking the lead in the majority of the core assassinations. This is frustrating, especially since Evie is pitched as the more stealthy of the pair. But I soon realised that Syndicate is just not that interested in exploring forgotten tombs in search of dusty relics; it wants to liberate the great city of London from its terrible oppressors. And to be blunt, Syndicate’s a much better experience for identifying more closely with the goals of Jacob.

Despite being sidelined so often, Evie comes across as the more nuanced character, struggling with her sense of duty, where Jacob is a more straightforward bloke with clear goals. By the end of the 20-hour campaign, I felt like I’d probably spent more time with Evie due to prefering her in side missions, and I certainly knew her better. She sees the bigger picture, with her missions tackling problems Jacob can’t even comprehend. Evie also stars in my favourite assassination mission – a nighttime infiltration of the Tower of London.

When I saw announcement for this game I knew it – the Victorian London setting is going to be awesome!It almost starting to feel like AC Syndicate is semi – interactive art showcase, a massive tech demo for photo-realistic recreations of various periods in history.Walking around the foggy streets of central London by gaslight is wonderfully atmospheric.You can see Big Ben, the Houses of Parliament and Hawksmoor’s churches.London looks both fantastic and realistic with all shops,factories,sidewalks and you can visualy enjoy every moment of it.Syndicate is a stunning achievement of historical tourism.

You can play as either of two forementioned syblings.

The twin protagonists are reflected in a splitting of objectives and game styles. In Syndicate, Victorian London is the centre of the world and it’s dominated by the Templars on every level. They control industry, run the establishment and even command the London street gangs, all the time searching for the all-powerful pieces of Eden and – worse – for applications for their power. Jacob’s intent is to tackle the Templar’s power at street level, building a new gang, the Rooks, to fight the Templar’s chosen gang, the Blighters, taking them out borough by borough, territory by territory. Evie, meanwhile, is chasing the pieces of Eden. She favours working from the shadows, finding out what the Templars are up to and beating them to the prize.

In actual gameplay terms this gives you two sets of missions, with a string following Evie’s search and her battles against high-ranking Templars, while in the background you’re engaged in gang warfare, both through story-based missions and a repeated set of activities.

As well as clearing strongholds of Blighters, you’ll find yourself kidnapping leading thugs and delivering them to Inspector Abberline of Scotland Yard, or simply murdering others to take them out of the picture. You can weaken the Blighters’ grip by rescuing poor urchins from enforced hard labour, too. Clear a borough of all gang objectives, and you’ll find yourself in a climactic gang-battle with the local Blighter boss. In truth, it’s more like a post-pub scrap than Gangs of New York, but defeat the boss and another borough’s yours.

Don’t go in expecting a gangland sim. This is still primarily a game of stealth, rooftop-running, climbing and close-quarters combat, and while you can recruit a couple of Rooks to help you on a mission, there’s no-one else to do the dirty work but you. On the other hand, you do get a cool travelling HQ on a moving train, plus the means to earn cash and upgrade your gang members, making them tougher in combat, giving them new equipment and capabilities or ensuring they’re a bigger presence in handy carriages on the London streets.

The carriages are a big thing here. Not only can you grab or hijack one to get you from A to B in half the time, but certain missions – and all kidnap missions – involve speeding away from pursuing Blighters with their own wheels to use. This is a lot of fun in short doses, as you weave your way through the horse-drawn traffic, side-swiping or shooting the enemy to wipe them off your tail, with responsive controls and all those great London sights to speed on past.

On top of all this stuff you’ll find your duo meeting up with some of the greats of Victorian society and innovation, including Charles Dickens, Charles Darwin and Alexander Graham Bell. Admittedly, Darwin is oddly spry for a distinguished elderly scientist, and his appearances aren’t the only time I felt like I might be playing a Horrible Histories Victorian game. Syndicate scores surprisingly well for period atmosphere and detail, from its penny dreadfuls to some surprisingly well-researched speech, but the accents can be dodgy or overblown, while bystanders still seem oddly oblivious to your activities, as if there’s nothing more natural for the average factory worker than a hooded woman prowling around the catwalks, leaping down to stick a blade in your supervisor’s throat.There has always been a lot of busywork in Assassin’s Creed, but Syndicate makes a real meal of it and a lot of what used to be optional isn’t so optional here. This only draws more attention to the fact that Syndicate is still, at heart, full of the same old stuff you’ve been doing since the original Assassin’s Creed. If you were tired of the core gameplay already, Syndicate’s twists won’t revitalise your interest.
It can also be over-convoluted. For example, not only do you have separate skill trees for Jacob and Evie but separate upgrade systems too, plus an additional upgrade system for your gang and a whole scavenging and crafting thing on top of that. Ubisoft is often accused of mistaking systems for content, and Syndicate can feel like a case in point. You want to crack on with the action, but the game wants you to do your homework first.
Overall, the good stuff wins out and, whatever else you can say about Syndicate, it’s nowhere near as glitch as Unity or AC3 was at launch. I have seen the odd visual glitch and some occasional, terrible slowdown, but nothing really embarrassing. I might have just been lucky, but I’ve been playing with retail code and a Day One patch, so I’d hope that’s not the case. 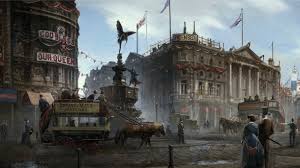 Big, beautiful, rich and atmospheric, Syndicate feels like a return to the glory days.The gameplay that was growing stale remains so while all the gangland stuff can bog things down, but Victorian London seems to suit the series and allow it to play to its strengths.