It’s 1965 and the US ground war in Vietnam happening. As a US Army commander, wage a counter-insurgency to secure the Ia Drang valley, on the border with Cambodia.

While it’s a slightly limited experience, Vietnam ’65 impresses with its novel mechanics, interesting setting and entertaining gameplay. True innovation is rare in the wargaming world, but this title has it by the Huey-load. And, with its super-budget price, this is one game that all strategy fans can afford to try.

To carry Out your COIN mission, co-ordination of ground troops, special forces, artillery, mechanized units, training of local forces (ARVN) and airmobile assets is essential, but of greater consequence is winning the support of the local population. With greater co-operation from the local inhabitants comes the reward of intelligence, a key factor in COIN warfare.The war is not fought in isolation, so as the commander of the US forces, you will have the added complexity of managing the support for the war back home, should you the lose the Hearts and Minds of the American people, the war will also be surely lost.This is a game that captures the true essence of the Vietnam War, where airmobile operations are paramount, fire support bases play a critical role and air strikes can save the day.

So, war in Vietnam.The conflict that saw the defeat of the mightiest war machine on the planet, and gave us an awful hint as to the future of insurgencies.It’s been fodder for many excellent films. But the picture is much more sparse when it comes to strategy games.

That’s likely down to the piecemeal nature of the action. This wasn’t the ordered chaos of regular warfare. It was elephants swatting at deadly biting insects, hitting one then desperately searching to see where the others had flown off to hide.

So that’s what Vietnam…’65 sets out to mimic. Each game presents you with a randomly-generated map of villages and roads, jungle and clearings.

Somewhere out there is the Ho Chi Minh trail, an invisible network that spawns Vietnamese units.

If they get close to villages, the sympathy of the residents toward the US occupation decreases. Your job is to stop that happening.

Your main tool for this task is grunt infantry. These boys will steamroll over most Communist units, but they’re slow and quickly run out of supply in the unforgiving terrain.

You have to use engineers to establish a network of bases, helicopters to ferry troops and supplies around, and scouts to patrol and warn of impending attacks.

At first, this is easy. You fly out a few infantry units and drop them into villages. Doing so reveals the political sympathy of that village, tilts them a little toward the US, and may reveal guerrillas in the nearby jungle. 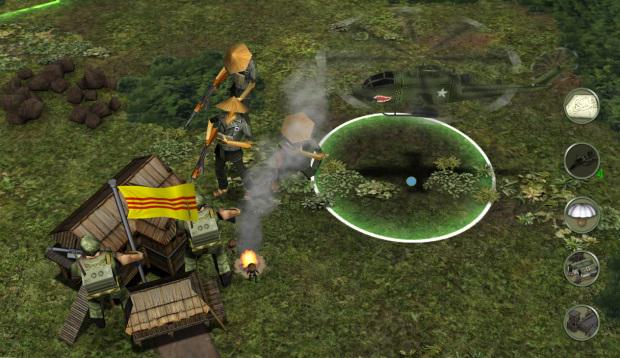 Things can deteriorate with incredible speed. Those silent Communists on their jungle trails will visit tree enshrouded villages where choppers can’t land.

There, they’ll fill heads with red propaganda and your score will slide down toward defeat. If you don’t act they’ll set up bases in the jungle from which more units will spawn or even start shelling you with artillery.

Although easy to pick up and play, the game has the right thematic feel for Vietnam. Like a game of whack-a-mole, except your hammer is a tank and the moles can kill you if you don’t hit them fast enough.

You buy troops with a pool of political capital, because American boots on the ground aren’t popular at home. Only victories against the communists can win you the right to get more units on patrol.

Unlike many strategy games, it looks the part too. The faux-3D graphics allow you to zoom in and view the jungle in close detail. The textures make you want to run your hand over the treetops.

The trouble with such a simplistic model, though, is that it begins to get a bit repetitive after a while. Wins can earn you promotions in a sort of career mode, and managing specific tasks can earn you medals.

But really, this is just a thinly veiled gamecenter achievements system. It does help to keep you interested, but not a lot. So you may not enjoy this premium-price title for as long as you expect.

On the other hand, Vietnam…’65‘s accessibility makes it a good fit for mobile. And managing to pin down and destroy the ghost-like enemy can often be grimly addictive. Much like Vietnam itself.