Just on time,another political simulation game coming in the America’s election year.Not about it being an election year—it is—but about all the other stuff. In reality, it’s a time of super-heated rhetoric, unrestrained nastiness, and grotesque behavior—and also time for a new version of Stardock’s election simulator The Political Machine.

The Political Machine 2016 is all about getting elected by any means necessary. Sling some mud, take advantage of circumstance, say stupid, obscene things on national radio, and spend, spend, spend. It includes more than a dozen pre-made, real-life candidates, like Hillary, Bern, and The Donald, and if you don’t care for any of them (and who could blame you?) you can create your own instead. National hot-buttons are a priority, but regional issues will have to dealt with as well: Embrace some, bury others, and try not to alienate too many people on your quest to mainstream acceptability (and ownership of the nuclear football).

“The game deals with topics like the Keystone XL Pipeline, human trafficking, and other issues that are current and relevant to this year’s election,” Producer Patrick Shaw said. “We’ve added a poll tracking feature so that you can see how your own political races are matching up to what’s going on in the United States right now.”

Each week Marsh Davies unleashes a patriotic aquiline shriek and swoops upon the home of the brave that is Early Access, bringing freedom by way of cash-purchased endorsements and glib media-ready soundbites to all he meets. This week, these skills will hopefully propel him all the way to the White House in The Political Machine 2016[Steam page], a timely update of the presidential campaign strategy game in which candidates scoot between states, bellowing platitudes to the credulous and smarming their way through interviews while doing everything to sabotage their opponents.

The candidates and hot-button issues may have changed, but these, the game suggests, are almost trivial details alongside the monstrous apparatus of the media. Which is possibly one justification for why The Political Machine 2016 is so much like The Political Machine 2012, compounding the series’ cynical message that elections aren’t won by principled stands or coherent, evidence-based policy-making, but instead by the more timeless tactics of pandering to prejudice, by buying endorsements, by slickly meaningless performance and by the attritional war waged on the national psyche via a 24-hour news presence. If you can just get your name ringing like tinnitus inside the public’s collective head then you’re halfway to the White House.

Though The Political Machine might be more caricature than simulation, in a year when the Republican primaries are an unprecedented cavalcade of hooting dipshittery, you might have to concede that the game’s scorn for the substance of policy is not without justification. But how does the game balance such extremes? To find out, I would have to play as the dipshittiest hooter possible. But who could claim, even among this debased troupe of howling scumwanks, to be truly the emptiest bellowing meathole of the lot?

The game’s bobblehead representation of him is a surprising likeness, if rather flattering, giving him a pert little pout instead of an unspooled Cumberland sausage for a mouth, not quite capturing the horrifying pillowy hamscape of his face. He, of all the possible candidates, offers the most extreme credentials. He has close to zero credibility, but he does have an absolute fuckton of money. A win for Trump would be to double-down on the game’s inherent cynicism, the nightmarish embrace of true nihilism. So, I’m going for it.

As my opponent, I pick Hillary Clinton – relatively principled, high-profile and a skilled political operator. If Trump can beat her it will be truly, exquisitely dismaying. As the campaign begins – a short one at 21 weeks – some of the states are already predisposed to our candidacies. Hillary’s cloying goodie-two-shoes liberality already appeals strongly to those pastrami-swollen New York yuppies, turning it and the surrounding coastal states a tentative blue. She also claims the bleeding-hearts and skunk-muddled minds of Washington, New Mexico and a handful of other cheesemaking states clustered in the north around Wisconsin. And of course she has California, where for some reason it’s still legal to wear a bow-tie while skateboarding. Disgusting. 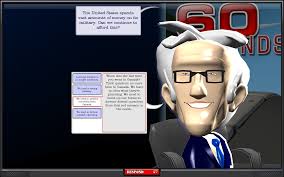