Epic story about knight from Gotham getting its explosive finale!

Rocksteady Studios was founded in 2004 by Sefton Hill and Jamie Walker and they are well-known by their Batman series.

In the explosive finale to the Arkham series, Batman faces the ultimate threat against the city he is sworn to protect. The Scarecrow returns to unite an impressive roster of super villains, including Penguin, Two-Face and Harley Quinn, to destroy The Dark Knight forever. Batman: Arkham Knight introduces Rocksteady’s uniquely designed version of the Batmobile,

which is drivable for the first time in the franchise. The addition of this legendary vehicle, combined with the acclaimed gameplay of the Batman Arkham series, offers gamers the ultimate and complete Batman experience as they tear through the streets and soar across the skyline of the entirety of Gotham City.

Many gadgets and gameplay elements from previous Arkham games return, including the grapnel gun, line launcher, batarangs, the countering system and detective vision.Batman can use some gadgets while gliding, such as batarangs or the line-launcher. The player can fly

Batman throughout the city using his cape, with gliding now allowing for longer sustained flights, steeper dives and higher climbs. The grapnel gun can now be used to instantly switch directions during a glide, as well as being fired twice while in the air to chain grapneling moves together.There is also a new batarang sensor that can be thrown out to gain intel on the surrounding area. 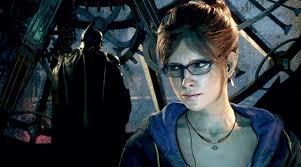 Changes to the combat system include the ability to combine attacks on prone enemies without interrupting the streak.Batman can also counter enemy attacks, and throw them into other enemies for increased damage. Typical enemies are now capable of performing a charge and tackle attack only used by larger enemies in previous games; precision timed dodging and a batarang can instantly defeat some charging enemies. Batman can now access grates from far away, allowing him to roll forward and immediately get under the grate if in range, instead of having to be right on top of them, while also initiating multiple takedowns from within them. Arkham Knight introduces “Fear Takedown”, where Batman can subdue up to three enemies simultaneously as long as he remains undetected; time is slowed after each take down, allowing the player to target the next enemy.Hazardous items within the area, such as power generators, can be integrated into combat for environmental attacks.Batman is also capable of disarming enemies wielding items like baseball bats, and using the acquired weapon on several foes before it breaks.Some enemies are armed with guns which significantly damage Batman. The game also introduces a controller rumble-driven, hacking mini game.Riddler Trophies also return. Unlike other Batman games, Arkham Knight does not feature a fast travel system as the designers considered moving around the city to be part of the game, and allowing players to skip that would detract from the experience. During early development, Rocksteady placed a prototype Batmobile in the existing Arkham City map, and learned that the claustrophobic city designed for Batman to glide and grapple did not work well for driving a vehicle.

Nick Arundel returns to compose the music for the game.

Batman: Arkham Knight is scheduled for release on PlayStation 4, Xbox One, and Microsoft Windows on June 2015.The game was originally scheduled to be released during Batman’s 75th Anniversary celebration in 2014.